Crossing and Breeding Chile Peppers
(how to create your own hybrids!)

Anatomy of the chile pepper flower

Ok, enough about the science, let's get into some action!
Here's a simple way how to breed your own varieties by mixing your
favorite varieties.
First, make a decision about the varieties you'd like to test.
At first, it's good to select varieties which have as different pods as possible,
that way you'll be able to see the differences between the properties more easily.
Also, it's good to select the varieties within the same species first, it's
much easier to learn that way compared with the mixed species.

1. Select a flower from the variety you want to use as a male with the breeding.
Here's C. annuum var. 'Malawi Bird's Eye'

2. Then, select a flower from the variety you want to use as a female with the breeding.
C. annuum var. 'Cayenne' works as a female here.

3. Use forceps to remove the petals from the closed female flower bud. 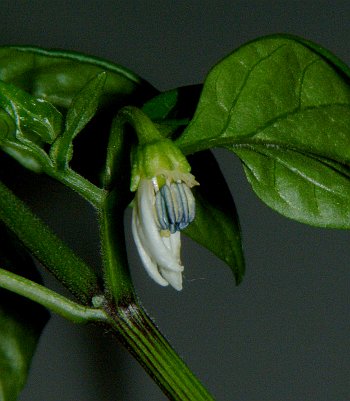 3. Half of the petals removed. 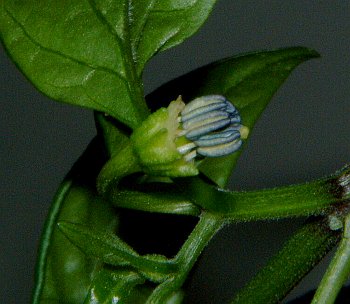 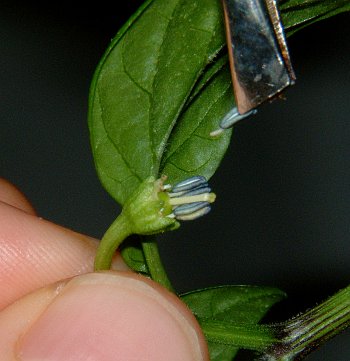 5. Ok, now it's time to start emasculating!
Use forceps to pick off the stamens, but
be very careful not to damage the pistil on the middle of the blossom end.
Magnifying glass might be useful here, especially with smaller-flowered
varieties.

6. Removing the last stamen.
Now you can see pistil left on the flower.
This flower is a pure female now.
It would be a good thing to emasculate more flowers from this
plant to increase the change of succeeding with pollinating. 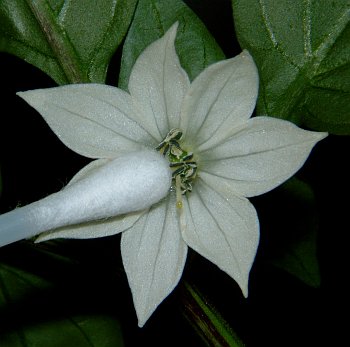 7. Then, use a cotton stick to collect some pollen from the stamens
of the variety you're using as a male.

8. Transfer the pollen to the stigma (tip) of the pistil, and
we're almost done!
(Pollinate all of the emasculated flowers you have on this plant.)

9. Final stage is to label the cross.
The first variety name on the label will tell which one is the female.

Within the next week or so the flowers will fall off if the cross won't take.
In other case, you'll have the seeds for your cross after the pod has matured!
After germinating the crossed seeds you'll be able to see the results of the cross.
If this isn't interesting and fun, then what is?