The C. galapagoense is an endemic species in the Galápagos Islands off the coast of Ecuador in South America. As one might expect from anything coming from Galápagos Islands, this species
is endemic - and very strange! It is a rather small plant with distinctive,
densely hairy leaves which spread strong, pleasant odour when touched.  The
leaves are small, like the pure white, Tepin-like flower and the berries.
The shape of the leaves resembles C. annuum plants.

The climate in the Galápagos (which means "tortoises" in Spanish) is relatively mild, considering that the islands are located at the Equator.  While not being exactly "cool", the temperatures usually stay around 30oC, which is not as high as the 40oC which the North of Brazil and other equatorial regions experience.  As Darwin wrote on his The Voyage of the Beagle book, "Considering that these islands are placed directly under the equator, the climate is far from being excessively hot; this seems chiefly caused by the singularly low temperature of the surrounding water, brought here by the great southern Polar current." 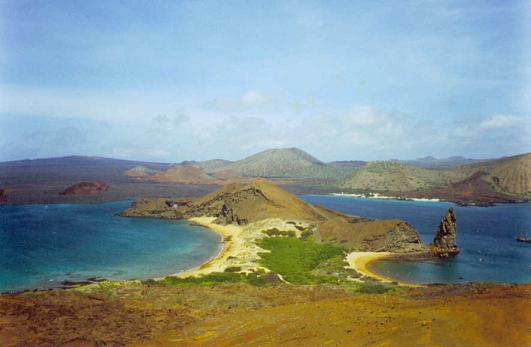 The precipitation is very small during the biggest part of the year, the Dry Season, and even during the Wet Season, precipitation is irregular at best, as Darwin himself puts it: "Excepting during one short season, very little rain falls, and even then it is irregular; but the clouds generally hang low. Hence, whilst the lower parts of the islands are very sterile, the upper parts, at a height of a thousand feet and upwards, possess a damp climate and a tolerably luxuriant vegetation. This is especially the case on the windward sides of the islands, which first receive and condense the moisture from the atmosphere."

It is not documented where in the Galápagos the C. galapagoense comes from, but considering the general climate of the islands it is tempting to conclude that it comes from the upper, more humid and more fertile areas.

One growing hint might be that the plants don't take much water in from the soil (due to the lack of precipitation), but mostly from the air, which might explain the hairy structures of the leaves (the hairs increase the total surface area, which might help to absorb water).  During the Dry Season, fog occurs so often that it even gives the season its name, "Garúa", which means fog in Spanish.

It belongs to the Capsicum annuum complex, being closely related to C. annuum
var. glabriusculum and C. chacöense, with which it is reportedly even able to
cross-breed in some cases.

It is one of the most challenging Capsicum spp. species to grow at home. It clearly demands fundamentally different growing conditions than most other species and those conditions are still quite unclear (unless, of course, one can recreate the climate of the Galápagos islands).  As result, the plant can grow and even look quite healthy indoors or in a garden, but it doesn't bloom easily and in some cases not at all. It is also bad at handling cold weather, especially sudden changes in temperature.

The most striking feature of C. galapagoense is its silvery "fur", clearly visible everywhere. Further amazement follows when someone touches the plant and the strong perfume odour fills the room. For some reason, this fragrance isn't around all the time, and seems to depend on some still uncertain growing conditions. Perhaps the plant only uses the trick in blooming season, in order to attract more pollinators. The pods are very small, round and dark green when immature. Very beautiful plant, with hairs covering all the stems, pedicels and leaves. It is very hard to make cuttings of this species root, but with the help of advanced hydroponic systems it is possible. Check the amount of powder from one pod: Ladybug on a C. galapagoense leaf: Sources: Inferno Chili, The Voyage of the Beagle, Galapagos Climate

Seeds for this species available here.